Have You Got The Bottle MCS?

At MCS we are extremely proud to be part of this amazing campaign and have loved all the opportunities we have been given to aid its ongoing success. This blog post highlights some of our favourite contributions to the campaign so far and we look forward to what we all might get up to this year!

We have been running a citizen science project called Beachwatch for over 22 years which involves thousands of fantastic volunteers taking part in beach cleans whilst collecting important beach litter data. We have been able to share our data on all drinks related litter items with the HYGTB team which has been used in calls for evidence, consultation responses, press and social media and even in a letter to the Environment Minister of Quebec in support of their Deposit Return System! 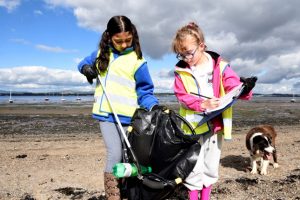 In 2016 our volunteers found an item of drinks related litter on every three metres of Scottish coastline surveyed. (Credit: Falkirk Council)

We are hoping to invite all the HYGTB partners out on a beach clean and litter survey soon to add to this dataset so watch this space!

Here at MCS we like to think outside the box a little and we have definitely found kindred spirits within the HYGTB coalition. Instead of inviting MSPs to the first Parliamentary event in January 2016 by letter or by email, we decided to send the invite as a label on a bottle found on a local Edinburgh beach!

The bottles were collected, cleaned and labelled by some of our wonderful Sea Champion volunteers before being dropped off with the HYGTB team for posting to Parliament! 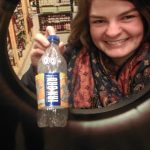 Following the Parliamentary event we joined the HYGTB team and several partners on a field trip to Norway to look at a Deposit Return System in action. Enter Billy the Bottle! Billy was found on a beach up in Moray and was given a new lease of life as the MCS mascot for the trip. We tweeted about how successful the Norwegian system is and how if we had one in Scotland, Billy perhaps would never have been abandoned on the beach in the first place. Click on the picture of Billy and our Scotland Conservation Officer Catherine to see one of his videos! 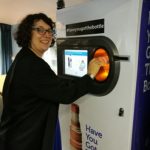 We do enjoy our acronyms don’t we? After such a successful reception of our beach bottles in Parliament we thought we would do the same at our Conference and AGM last year held in the Royal Zoological Society Scotland Education Centre. Each delegate found yet another Sea Champion collected beach bottle with the instruction on the label to use the Reverse Vending Machine during the breaks for a very special deposit return – a shot of whisky! During the break the HYGTB team had a long Q of delegates waiting to use the machine and find out more about the campaign. As well as a fantastic evening of raising awareness and promoting HYGTB, fellow partners RZSS have since adopted the Reverse Vending Machine to use during education workshops and events.

To further highlight the campaign we started a social media hashtag that everyone could get involved in. All you need to do  any time you spot any littered or ‘wild’ bottles is take a quick picture and post it to social media with the hashtag #wildbottlesighting. We have been working on a map of these #wildbottlesightings to show that the problem of ‘wild bottles’ is not just at the coast but also in parks, streets and rivers.

Click on the map to report your own #wildbottlesighting

I think this one is our favourite so far. Through the HYGTB team and Beachwatch we became good friends with Cramond Primary here in Edinburgh. They have been taking part in our beach cleans and education workshops for a couple of years now and they were ready to take their campaigning to the next level. Using bottles from fellow partner Changeworks the pupils of Cramond Primary along with one of our super Sea Champions created a massive jellyfish out of plastic bottles! That’s not all though, they then used the beach bottles from the Conference to write messages to the attending MSPs all about Deposit Return and why they thought it would be a good idea for Scotland. They attached all these bottles to a fishing net donated by Dunbar Harbour to show the impacts plastic is having not just on our marine wildlife but on marine industry too

We took the jellyfish, the net and five of the pupils along to the event to talk to MSPs about what they had learnt and wow did they steal the show or what! Cabinet Secretary Roseanna Cunningham had a fantastic discussion with our junior campaigners who expertly answered questions on Deposit Return Systems and why they think it would be good for Scotland. 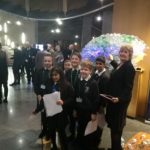 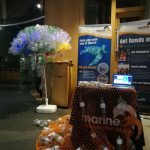 We aren’t quite sure how to top a bottle jellyfish in Parliament but we will definitely continue to try to think outside the box to help support and promote this fantastic campaign – watch this space!