The Have You Got The Bottle? team visited Oslo to research how deposit return systems work so effectively to promote recycling and reduce litter.

The Have You Got The Bottle? team are in Oslo studying the Norwegian deposit return system. We visited a small shop, a medium supermarket and a large supermarket to see reverse vending machines in action. All the staff said the machines were easy and quick to maintain and we saw no queues anywhere. Then we visited the impressive factory where 80% of all Norway’s plastic bottles and metal cans are sorted and baled by Infinitum, the central organisation which runs the Norwegian deposit return system. We learnt how flexible such systems can be depending on the country in which they operate. Everyone we met was very helpful but the weather was very Scottish – cold, grey and drizzly. Our mascot Billy the Bottle has been having a great time seeing how much better his Norwegian cousins are cared for. Quote of the Day, from a Scottish shopkeeper: “It’s sounding better every minute!”.

This diagram shows what happens from the customer paying a deposit when they purchase a drink, to how they get their refund, and what happens to the bottle or can next! 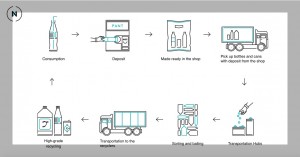 On our second day in Norway we visited three shops in central Oslo, which between them demonstrated really well the flexibility and simplicity built into Norway’s deposit return system. The first was a small snack bar with a low turnover of deposit cans and bottles. So the owner simply stores those for which he has returned the deposit from his till. He then takes them to a nearby small supermarket where he has an informal arrangement to put them into that store’s reverse vending machine (RVM), reclaim the deposits and replenish his till. The second, a small café/takeaway, operates a similar manual ‘bag and tag’ system to the one we’d seen at the petrol station the previous day, and the third was a small supermarket with its own RVM. It remained cold and dry but the sun came out, so we saw more clearly what a beautiful city Oslo is. Some of us had time to explore the impressive new Opera House and a few of us sampled possibly the most pleasant public toilets we’d ever experienced, in a smart new harbourside retail development. The centre of Oslo is populated largely by trams, bendy buses, bikes and a remarkably high proportion of electric cars, including some very upmarket Teslas. And Billy the beach bottle decided he liked Norway so much that he decided to stay for a few days longer.